A REGULAR PODCAST WITH TRIAL ATTORNEY SCOTT GLOVSKY AND GUESTS

Scott Glovsky, award-winning California personal injury lawyer, talks with the country’s best attorneys about being a trial lawyer. They discuss cases that had a profound impact on the attorneys. The episodes provide insights on how to strategize a case, how to connect with clients, how to get to the heart of a story, how to turn the weakest parts of a case into part a winning trial story, and more. These heartfelt stories can help lawyers become better lawyers.

In this episode I’m talking with Cliff Atkinson. I’ve read Cliff’s  books, including the fourth edition of Cliff’s phenomenal book, Beyond Bullet Points because it has been such a wealth of knowledge and wisdom. I’m delighted to have Cliff with us here today to share his wisdom and knowledge with you. Cliff is a leading expert in visual storytelling in trial. When he started out, his first case was with Mark Lanier which became a humongous verdict and really was a game changer for a lot of lawyers around the country in how to approach opening statements and how to visually tell stories. And since working with Mark Lanier, Cliff has been working with hundreds of lawyers throughout the country. I hope you enjoy the podcast. In this episode, I speak with the wonderful lawyer from South Dakota, Jim Leach. Jim tells us about a case in which he successfully challenged the practice of small police departments forcibly catheterizing drug suspects when they needed to get evidence of drug use. The latest episode of Trial Lawyer Talk is the first of two Podcasts with Eric Fong. Eric talks about how to overcome fear and obstacles in and outside of the courtroom. He also discusses his recent case where he won a $91 million settlement which has a lot of great lessons for any trial lawyer. Eric is a creative and charismatic person, and I hope you’ll learn a lot from his advice and experience. Adrian Baca discusses the case of an admitted gang member, Reggie Cole, who spent nearly 20 years in prison for a crime he didn’t commit. This wrongful conviction case was the subject of an article in Rolling Stone magazine called, “How I killed my way out of prison.” Once out of prison, Reggie got involved in a shooting and was charged with mayhem and a gang allegation. In this case, Reggie faced the death penalty. One of the best attorneys in Los Angeles tried the case and it resulted in a hung jury. Mr. Baca talks about his handling of the retrial. This episode of Trial Lawyer Talk was recorded on Juneteenth. Employment attorney Genie Harrison discusses a famous case for a black firefighter that caused racial division in Los Angeles. What started as an incident of racial harassment and discrimination, very quickly grew into a hostile work environment with retaliation. Ultimately, it became a constructive termination case ending a career. 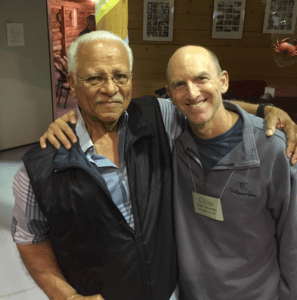 In this episode of Trial Lawyer Talk, we are humbled to have Don Clarkson join us to explain “Donisms.” Don Clarkson is a phenomenal psychodramatist who pioneered psychodrama training for trial lawyers. Gerry Spence brought Don in when he started the Trial Lawyers College in 1994. The idea that Gerry and others had was that to become a better lawyer, you need to become a better person. You need to pursue your journey inward of self-exploration and figure out who you are. Then, you can use this insight to become your true self and your full self in the courtroom.